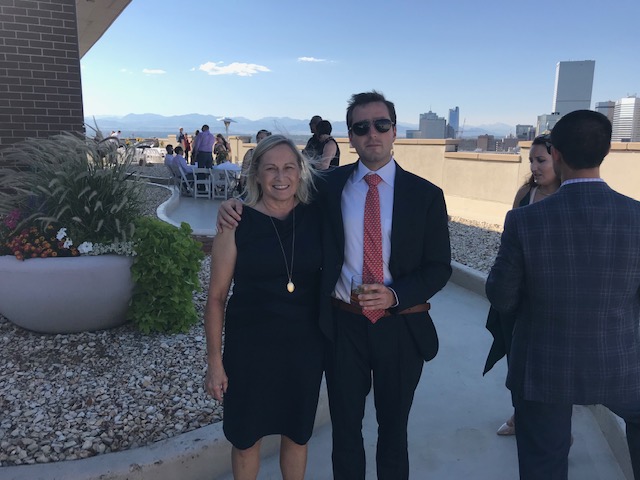 As I watched my son Robbie be handcuffed and taken away to jail, I was jolted.  It was 2 a.m., and my firstborn —with a college degree and all the potential in the world — was arrested after totaling his car.  This would be his 2ndDUI — a mandatory felony conviction.  He had been a “party hearty” type of personality, meaning he drank, used substances and led a functional life of education and work.  I was a concerned parent, but Robbie had convinced me his substance use was under control.

This time was different.  I now knew.  My beautiful boy had an addiction issue and needed help.  Thankfully, Robbie agreed to enter a treatment program in Arizona.  I was confident that this would be the first — and last — stint in rehab my son would ever need.

Before Robbie was discharged, I attended “Family Week”.  This program taught me more than I wanted to know about different types of drugs and addiction, as well as the behaviors they cause. I also learned about enabling, forgiveness, and allowing consequences for one’s actions.  I learned that addiction is a lifelong disease, from which there is remission but no cure.

Robbie and I signed a contract dictating how our relationship would be going forward.  Following his discharge and return home however, it took mere hours for Robbie to breach the contract.  With this early relapse, my husband and I took action.  We moved our son into a sober house, where one of the directors suggested I write Robbie’s obituary, because he believed I needed to prepare myself for the worst.

As a parent with a loved one affected by addiction, Family Week was just the beginning.  Similar to Robbie, I have been on my own parallel journey of recovery.  I educated myself through readings and podcasts, as well as individual therapy and local support groups.

The journey has been long.  My son’s stint in the Arizona rehab was not his last.  He went back for a second time, after trying to live on his own in Colorado.  I had endured spending a night in his apartment, before his flight from Denver to Tucson.  What I found there was scary and shocking: bags of pills in various sizes, shapes and colors; the general disarray in his life — the lying and the shame.

The struggles and challenges we both have faced have been worth it. My beloved son Robbie is about five weeks away from celebrating five years of being clean and sober. Opioid addiction consumed him for years, so maybe I shouldn’t have been surprised it took years to overcome it.  I can unequivocally state that the person who inhabits my son’s body today could not be more different. He’s the financial officer in an online media company, a homeowner, steady and loyal boyfriend, and 12-step group meeting leader.

Now, Robbie inspires me. In the face of challenges life has thrown him, he stays upbeat — grateful to be alive. He is the first person I call when I start to feel down. My firstborn — My Little Guy — is not only my son, he’s my “sun.”