On Tuesday, May 8th at Saxe Middle School, Dr. Kevin Hill, author and internationally-known marijuana expert, presented to parents and concerned citizens during an evening event entitled “Marijuana: Just the Facts.” Dr. Hill, author of the book Marijuana: The Unbiased Truth about the World’s Most Popular Weed, is also an addiction psychiatrist and faculty member of Harvard Medical School.  After his keynote presentation, he joined a panel of local experts who answered questions from the audience.  Contributing to the Q&A were: John Hamilton of Mountainside Treatment Center (moderator), Dr. John Douglas of Silver Hill Hospital, and Amy McDonnell of Aware Recovery Care.   The event was hosted by New Canaan Parent Support Group and New Canaan Cares.

An important goal of the event was to bridge the gap between reality and the public perception of marijuana as being neither addictive nor harmful.  Dr. Hill cited a study, which surveyed high school seniors’ perception of harm from regular marijuana use.  The percentage of seniors seeing “great risk” has decreased from 80% in the early 90’s to about 30% in recent years.  Yet, Dr. Hill pointed out that evidence from well-vetted studies show a correlation between both increased incidence of psychosis (including schizophrenia) and lower IQ’s over time.  He noted that while marijuana might not directly cause overdose deaths, there are “different degrees of dangerous.”

Dr. Hill discussed how chronic marijuana use affects several different parts of the brain, including the amygdala and the hippocampus.  This process results in increased anxiety and impaired learning, especially for the adolescent brain.  Also, marijuana is addictive: one out of every 11 adults who use marijuana develops a dependency.  For adolescent marijuana users, that ratio worsens to 1 out of 6 who becomes addicted.

Amy McDonnell, BSW, gave the audience the perspective of someone who struggled after starting to use marijuana daily in high school.  Her use “opened me up to a different group of people.”  She stopped playing field hockey and was introduced to “harder drugs” with her new friends—including heroin.  For her, weed became a gateway.

In Dr. John Douglas’ private practice, he’s seeing many young adult patients who started with marijuana as their first drug, given how readily available it is.  He pointed out that DELAY IN USE is key –  no matter what the first drug of choice is, since delay becomes a “protective factor against developing an addictive disorder” throughout life.

Feedback from the 175 parents and citizens who attended was positive.  The audience appreciated learning about marijuana’s risks, and how the information could be used in family conversations.

In sum, the facts presented were both surprising and informative.  Clearly, a gap still exists between the public perception and the reality.

A video recording of the event is scheduled to be played on Channel 79, and can be viewed online here. 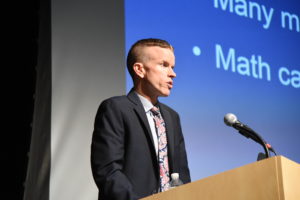 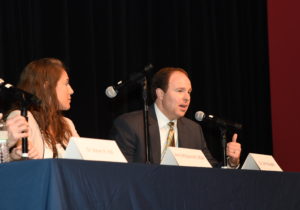 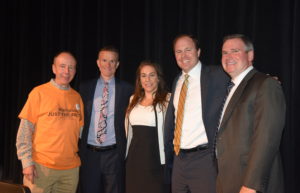